The third production of Theatra is House Sitters, written by Gorjan Miloshevski, an emerging author. This is also the premiere showing of a text that gives a comical depiction of a daily routine that young couple lives. A teacher of English and a web designer struggle and their inability to say “No.” puts them into a miscellany of situations out of which they are the only ones who know how to escape from. Their will to help people costs them their happiness, but the need to please them makes them go on.

The team of actors that play in House Sitters are Martin Petrovski, Tina Trpkoska and Sabina Ajrula. The costumes are designed by Ivana Knez, the stage design is made by Iva Necevska, and the promotional materials are done by Magdalena Dilevska. The marketing of the show is managed by Iva Dujak and Marija Zafirova. The play is directed by Biljana Radinoska.

For the first time in Macedonia, the direct approach in marketing was used for a theater show. During the campaign the audience had the chance to literally meet the main characters before they saw the performance. It was done via Facebook profiles of Davor and Sara Papuckovski, the characters, who through this social network made their first contact with their audience with whom they brought to life the story of House Sitters.

By staging this play, the independent theater paved the way of urban comedy and showed a clear attitude for faith in new playwrights. 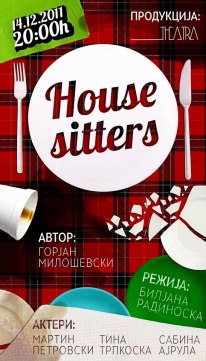