The Sound of Cracking Bones

The Sound of Cracking Bones, a shocking play by Suzanne Lebeau, was the text that designated the second season at Theatra.

This play unveils the story about a journal, two kids, two lost childhoods, war, terror, fear, bravery, endurance and pure love. The action takes place in Central Africa where children are kidnapped, turned into soldiers and trained to destruct at their 8, 10, 12 years of age. Their escape from the war camp is the starting point of this story. The show is made with documentary approach in theater.

Stefanija Zisovska, Bojan Kirkovski and Natasha Petrovik are the three actors who relentlessly bear this war drama from the start to the end. Gorjan Miloshevski and Marija Zafirova translated the play. Ivana Knez made the costumes. Oliver Josifovski and Vera Miloshevska brought out the music. The play is directed by Biljana Radinoska. The producer of this show is Marija Zafirova.

This theater piece produced by Theatra, had its premiere in September 2011. The international festival Young Open Theater began with this premiere showing. Later, there were visiting performances in Theater of Kumanovo and Theater Jordan Hadzi Konstantinov – Dzinot in Veles. The show was also part of the off program at the theater festival Vojdan Chernodrinski in Prilep. This play brought Stefanija Zisovska nomination for Best Actor Achievement.

The Sound of Cracking Bones 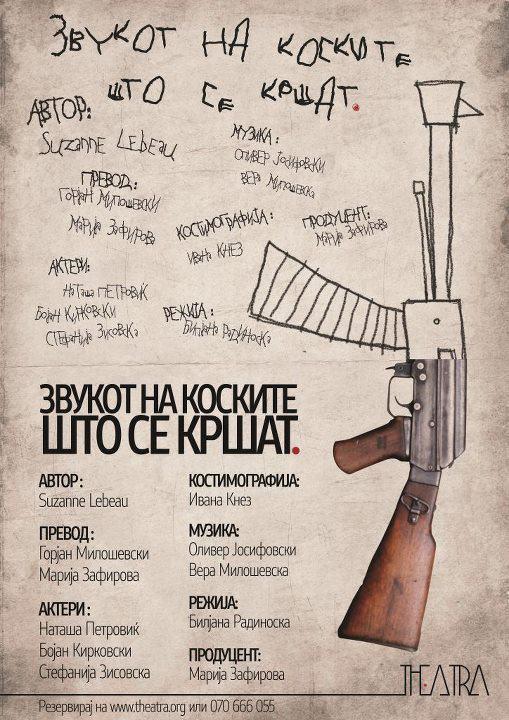